The first vision of the emblem arose many years before, on a Tuesday in 2005. My eyes were closed but its arcs and horizontal rails were so vivid, as if the light was coming from a different source. I drew it on a piece of paper with seven simple strokes, without knowing that it would accompany me for more than 15 years.

Sometimes rainbows get in the way and force the busy mind to enjoy life. They are one of those most fickle yet coolest occurrences, at the frontier between reality and illusion. A rainbow is complete, in the sense that it contains the full spectrum of colors known to the naked eye, and is a gift, because it can only be perceived from a specific moment and angle.

So then, , I happened to see a rainbow reflected on the water over Lake Geneva, like this photo taken by Lynne Torpy on Lake Ontario.The illusory flexion and the illusion of reflection – two illusions mirroring each other. And with a smile appearing, the tip of my tongue scratching my palate, I sensed that someone in me divined something before I even divined it myself.

I recognised the True Story emblem over that rainbow reflected on water, and called that moment “the beam catcher”. It suggested reciprocity between matter and energy, and the sun behind me, behind the observer, was the central pearl. For a moment I thought about changing the name of the T.S. emblem to Beam Catcher, but a little voice inside whispered ‘don’t call it the beam catcher! Wait and see….’

Then I saw the same reflection again on a bridge over Yangzhou’s West Lake, and on a branch floating on a stream in Gland’s scientific reserves. The irony of it is in finding a symbol of authentic living in illusory episodes.

“True Story!” describes an event that may be hard to believe but really happened.

Two words hold so much meaning, here even more related to what the emblem and the entire Blast cosmology is about:

True: being authentic. Removing layers of neurosis and embracing who we really are as individuals and as fractals of a universal heartbeat.

Story: living complete. Experiencing the theatrical play of our existence in an inspiring way for ourselves and others.

Ultimately, True Story is one of the many names that the symbol can embody in one idiom. In Dyar language it’s called Swindyar. One possible translation is “receive the deity”, and in a deeper meaning “manifest the deity of whispers”. 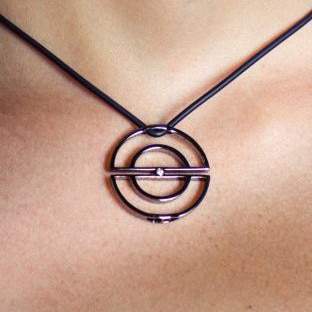 Four mirrored arcs,
Four mirrored spaces,
And a small non-dual central pearl containing both a circle and a space.

The emblem is first a device for the mind, visualised to align us with all that supports authenticity, and protect us from all that doesn’t.

It activates cosmo-telluric reception and emission, so it’s very useful for opening a creative channel and getting things done.

It’s shape explains how to align our mind, expression, body and aura to participate in stellar and planetary evolution. It conceals the sacred dance of freedom and framework.

The arcs and spaces below refer to the planetary, while the ones above, the stellar, with our essence bridging the two.

The emblem presents, not represents, the gateway to the heart’s sparks and ripples simultaneously. Blast defines the word ritual as: to set a symbol in movement. And the True Story emblem is the symbol that empowers the practitioner, with each ritual, to embrace, experience and retransmit all the cosmology at once.

It is no coincidence that the emblem is also the source of the nine syllacodes of the Dyar language, including their etymology and their correlation with the human aura and elements in nature.

As pictures elude and transcend the discursive mind, like any great symbol, the emblem’s power and eloquence is worth more than a thousand words – more than the sentiment the guardians of the True Story emblem carry wherever they go.